I have been making my own cycling documentary (separate from this one) for the last couple of years about the rider who comes last in the Tour. www.rougefilm.com But you can only be last in the race if you actually reach Paris.

Each day there is a Time Cut. This time cut is a margin of time added to the winning rider’s time. Perhaps on a stage which takes 6 hours for the winner to cross the line that additional margin may be 25 minutes. If you don’t make it home inside that 25 minute cushion you’re out of the race. End of story.

Today one of the Garmin riders failed to make the time cut. Magnus Backstedt (the guy who speaks 5 languages) is a big, lovable, powerful man known for drilling it at the front and leaving lesser men gasping for breath in his wake. Yesterday he was one of those gasping men and for the last 100k he rode alone fighting to stay in the race.

Competitive cycling is about suffering and Maggie suffered nobly yesterday but still crossed the line 4 minutes outside the cut. If he had made it would he have recovered enough to keep on going? He, for one, is as mystified as the rest of us as to where his form has gone.

Last night’s other news was that Manuel (Tricky) Beltran was ejected from the Tour for using EPO, the infamous drug that helps with recovery. After all the months of deprivation, suffering and hard training both men left the Tour today and will watch their team-mates arriving in Paris on TV.

The difference is that one man is looking at a doubtful future and possibly jail-time while the other can hold his head up high knowing that he did his best. 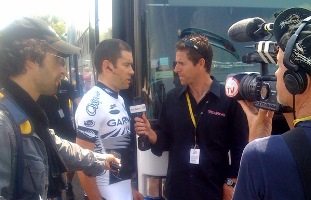