Everyone riding the Tour has a number stuck on each side of the back of their shirts. Today all the Garmin Chipotles were given yellow numbers as they are currently leaders of the team prize and Will Frischkorn, who created the winning breakaway 2 days ago, was wearing a red number today as the panel of judges voted him most aggressive rider. He gets 2,000 euros for that but told me he will share it with his team mates. 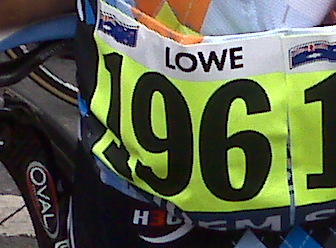 Many of the most famous riders have nicknames: Il Pirata, Il Grillo. Today we met and interviewed Le Blaireau (the Badger) otherwise known as Bernard Hinault and arguably one of the greatest living cyclists second only perhaps to Eddy Merckx (the Cannibal). Hinault won the Tour 5 times and was the last Frenchman to reach Paris in Yellow.

The Badger seemed to be quite compact and broad about the shoulders though still quite lean. His face is tanned and lined and his eyes sparkle when he smiles yet his teeth suggest he is a man not troubled much by vanity. He is a good advert for the Tour – relaxed, neatly dressed and happy to talk. I asked him questions in my appalling French and he happily replied discussing his fears about Le Dopage and his admiration for the Garmies and their pursuit of clean cycling.

Later, on the road, I wished I’d asked for a picture with this hero of the Tour but the images I have in my head of this tough rider, arms and hands throttling the bars while his teeth are gritted and his legs humble his opponents on some distant Alpine pass, would not sit well with a happy snapshot in a parking lot on a sunny morning.

I wonder what name they’ll give this year’s Tour winner.