L’Alpe d’Huez is the Lords, the Wrigley Field, the Wimbledon, the Monaco Grand Prix of cycling. There are certainly bigger and nastier mountains but ‘the Alpe’ is the one we all want to ride up.

Bourg d’Oisans is a small picturesque Alpine town in a long winding valley with massive rock walls climbing steeply upwards on both sides. You leave the centre of town, pass the Casino supermarket on your left, go across the roundabout towards the swimming pool and then start climbing and climbing and climbing.

Alpe d’Huez is known for its 21 virages (bends) and they say up to half a million fans line the 14km climb in a good year. The road up the mountain is spectacular whether you ride it or just go in the car, but what struck me the most this year was not the views but how ugly the village at the top is. Just another collection of rather garish resort buildings made for processing human beings so that they enter excited at one end and are ejected from the other, tired and cash-free.

I’d now like to share with you my thoughts on the last great mountain-top finish on this year’s Tour but, as I was waiting at the finish surrounded by other, better equipped newshounds (they have earpieces and producers telling them what’s happening) who blocked my view of the TV monitors I have no opinions of my own.

What I can reveal is that at the Club Med hotel after the race Michael Douglas, Mr. Zeta Jones himself, was introduced to Whitey, Lionel and other members of the team. I was allowed to film the event for posterity and slyly rolled tape as they all shook hands in the lobby and then repaired to the bar downstairs.

As Mr. ZJ and his entourage arrived down below a frisson of whispers and glances accompanied his journey to a quiet spot in the corner. He sat, and then, like he was the king, everyone else sat. And as I watched through my viewfinder I noticed he was alone and no-one dared talk to him, so he did what we all do at such times – he pulled out his Blackberry and sent the wife an e-mail. 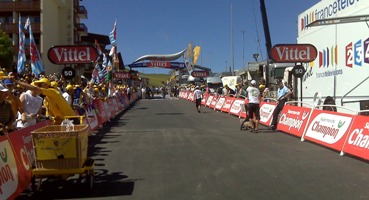