At first glance the members of the peloton are mostly very handsome and very healthy young men and there’s not an ounce of spare fat between the lot of them.

When you look downwards you notice a number of things: they have huge thighs, their legs are all shaved and deep brown and all of them, but all of them have a frightening array of cuts, bruises, scars and, in George Hincapie’s case, many frightening looking varicous veins.

The other night I filmed Garmin’s sprinter Julian Dean having his daily massage after the race. Julian is a compact, quiet yet warm and friendly man and he hails from New Zealand. The more observant of you may notice that his team kit is black and white with ferns on it and not the usual Garmin Chipotle blue and white. This is because he is the New Zealand National Champion and the rules say that all champs have to wear their national colors at the race. In fact Julian is one of at least three national champs on the Garmin bus.

As Julian lay back and talked the Soigneur massaged his muscles and I was stunned by the array of scars on his body. It quickly came apparent that he is a man of steel…literally. I think he said he has three steel plates in his body and was it a dozen or twenty screws? The laundry list of gashes, crashes, dislocations, sprains, fractures, other wounds and operations he shared with me took up minutes and minutes of tape.

As our conversation wound down I asked Julian what he ‘s got coming up next. “The Olympics in Beijing, I suppose,” he replied casually. Of the eight riders left on the bus at this point at least 2 will be travelling to Beijing and a 3rd would be going if not for previous infractions. Back in Boulder the Garmin team has at least one more Olympic athlete travelling to China.

After all the hard work training on the bike, riding these killer days on the Tour and getting ready for the Olympics I wondered where Julian would go on holiday if he had the chance? “I’d like to travel through South America.” 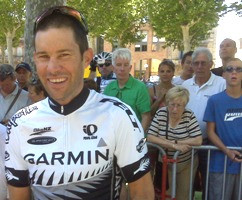