At the end of every stage in France, as we reach our destination, the sides of the roads are littered with the cars of all the eager fans trying to get to the race. Most of the parking is illegal and random but at least you can get by and reach L’Arrivee.

So, sunday afternoon – we’ve crossed the border into Italy and we’re racing to get to the end of the stage and suddenly the road is filled with cars parked randomly on both sides of the small feeder road just like France…but, unlike France, they we’re also parked in the right lane and the left lane and all the vehicles in both lanes pointed at the course. The road was completely blocked. We’d been driving hard for hours and we had to get to the end of the race, I wasn’t going to give up that easily.

David, intrepid co-pilote, set out to see what he could do. A Carabinieri appeared with an impressive hat, a Peter Sellers moustache, a whistle and a small plastic bat which he began to wave furiously at all the abandoned Fiats and Alfas. I half expected Sophia Loren to emerge from the crowd at any second.

Just like in the movies David and the Italian cop magically parted the red sea – but as we reached the road junction ahead we heard the helicopters coming, we had missed our chance to get to the end of the race for the second day running.

The difference between heaven and hell? In heaven the Italians organise the parties, in hell they run the trains… 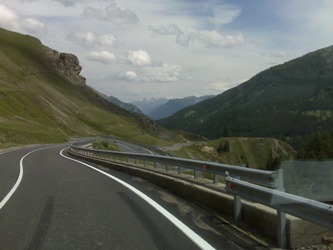