You are here: Home / About Dick / Dick’s resume 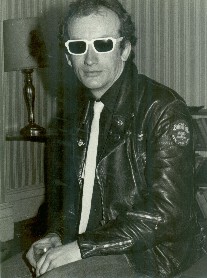 My future’s so bright I gotta wear bad shades…

ZERO BY VEGAS
Written by Nigel Dick – 2018
When Frank Pantani, retired hit-man, finds himself in need of money he has no choice but to accept another gig delving deep into the affairs of a Korean businessman in Vegas. Before long Pantani finds himself up to his neck in trouble swirling around in the murky waters of an up-coming election for a Nevada politician.

STELLA ROXX & THE KILLER BATS FROM HELL
Written by Nigel Dick – 2006
When Stella gets fired from her waitressing gig in North Hollywood she follows her dream and aces her audition as a bass player for the Vampire Killer Bats From Hell – not realizing that they really are vampires and they really do come from a place called Hell – and not the one in Michigan.

SIDEWALKING
Written by Nigel Dick; From the book Sidewalking by Nick Duerden – 2004
Jake inherits a large sum of money from his dying Grandad, buys himself a computer, writes an article and lands himself up to his neck in trouble. Turns out the money he inherited really belongs to Short Order a violent, seedy South London mobster. But Short Order is the least of his problems – it’s his crazy ex-galpal Katkin who will pursue him across the Atlantic to get her revenge.

CALLBACK
Written by Nigel Dick & Jordan Freid – 1999
Moe Jones, ambitious but perenially unemployed actor, figures that his career will take off if only he can land the bad-guy role in the next Die Hard movie. He discovers that dreams can come true but never quite the way he imagined.

COUNTRY LYFE
Written by Nigel Dick & Montagu Don – 1994
Patrick Lyfe’s career takes a quick downward turn and he finds himself out in the country with no money, no prospects and no hope. Can he get his life back on track before his pride is permanently crushed and the taxman comes knocking on his door?

HANGMAN
Written by Nigel Dick – 1994
When Harry Gunn’s car breaks down outside a small California-Arizona border town he finds himself up to his neck in intrigue and danger.

INTRODUCING ERIC
Story by Nigel Dick, screenplay by Anne Wycoff – 1993
Eric leads a complicated life in New York City with two problems – one is his girlfriend, the other is his other girlfriend. And when the twain shall meet his life becomes really, really complicated.

ONE WEEK IN APRIL
Written by Nigel Dick – 1989
As the world sits on the edge of its seat waiting to see if the crew of Apollo 13 will make it safely back to earth, Frankie McCluskey has problems of his own: he’s been wrongly accused of murder, he’s on the run and his girlfriend wants to ditch him.

PRIVATE INVESTIGATIONS
Story by Nigel Dick, screenplay by John Dahl & David Warfield – 1987
Joey Bradley comes home to find a dead man hanging in his shower. Then someone tries to murder him at the 7-11 – it seems the bad guys are after him – and they’re the cops.

DIRECTING CREDITS: MUSIC VIDEO Over 380 credits including the following artists

Grammy In The schools
USC
1998