The final Time Trial day of this year’s Tour started for David Millar at 8am with my camera in his face and a massive swig of water. Breakfast followed – an impressive selection of bowls of cereals.

Back in his room Millar selected an unwashed racing kit and downed more water chased by handfuls of mineral supplements. Minutes later his elegant six foot three frame was bent over the bike he famously threw over a fence at the Giro d’Italia (see YouTube) as his legs pounded out imaginary kilometres as his bike was clipped into a home trainer and wasn’t going anywhere.

The team were staying in an inexpensive hotel – part of a complex that included acres of parking space and concrete, a large supermarket and a McDonalds – and round the back of one of the buildings, the kind of place where a homeless man might seek shelter from the rain, he faced a wall under an overhang as his legs spun faster and faster. Soon a circle of bystanders appeared as a large puddle of perspiration collected under his bike: he wasn’t sweating bullets but golfballs. 3 more bidons of water went down the hatch as his legs spun at a speed and frequency that suggested an athlete of extaordinary strength and stamina. The work-out continued for 40 minutes and I wondered later why he would expend such a huge amount of energy on such an important morning: “To remove the stiffness from yesterday’s racing,” he explained bored with a question he was tired of answering.

He showered, lay on his bed, drank a large bottle of Vittel laced with sugar and pushed his legs into huge inflatable tubes connected to a pump designed to squeeze all the blood back to his heart sooner and thereby aid recovery.

At 1045 he was back in the dining room eating a plate of plain pasta with 2 fried eggs and drinking more water.

Noon: In the small town of Cerilly 300k south of Paris, Millar sat outside the team bus reading l’Equipe – fluent in French and Spanish Millar is a well-read and deeply thoughtful, eloquent man. He then moved inside the team bus and shifted languidly from one seat to another playing and supping with another bottle of water filled with sugar gel and munching on a power bar – I realised that if I’d spent the morning drinking and eating the way he had I would, by this time, be physically sick.

“Going to put my skin suit on now,” he announced, “this is the worst part of the day.” The skin suit is a one-piece outfit made from hi-tech fabric that aids the passage of wind over the athelete’s body and, as Millar is the current British TT champion, his is all in white with a horizontal red and blue stripe. He grunted and groaned as he contorted his body to slip inside the skin tight layer. Now Millar bent over like a patient at the proctologist’s while the soigneur pinned his racing number to his back – all those thousands of dollars in the wind-tunnel to get the right position on the bike and that special fabric and now he was having a small sail safety-pinned to his arse. 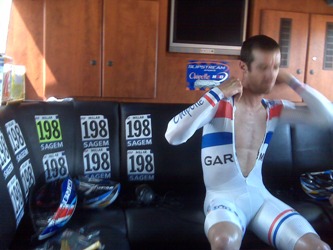 1pm: Millar is bent over sweating again warming-up on another trainer outside the bus. Fans watch in awe as the wheels spin faster and faster and all we can hear is an impressive whooshing sound as the spokes slice through the air. He’s chugging more water, listening to techno music and focused on some spot below him deep inside the earth and trying not to think of the hour of torture he’s about to put himself through. As Millar continues to pedal the team doctor pulls a special vest from the ice chest and throws it on Millar’s back. There’s some carefully thought-out medical reason for this and the whole crowd shudders as they watch Millar’s body twist with the shock as his core temperature drops fast.

1358: Millar is in the starting gate on his aerodynamically designed TT bike with its Union Jack wheels and an aerodynamic bottle filled up to a roughly etched half-way mark.

“Daviide Millarrrre, specialiste du contre la montre!” Says the man with the mic and he’s off.

For the next 53km I watch from the team car as Millar’s frame slams out a tempo that is just unbelievable. Even on these flat roads the car has trouble keeping up. JV talks to Millar through the radio unit in his space-age TT helmet: “Keep your head down, follow the white line, don’t break on this corner, come on, David, full gas! Full gas!”

Like a complex toy David is guided along the course by JV who rode it himself two days previously noting every bump and twist and turn. “Second drink point coming up, then 5k of false flat. Full gas, David, c’mon, full gas!”

Millar cranks it out and at one point nearly hurtles off the road; there’s a collective gasp and then nervous chuckling inside the car.

En route Millar sets new split-times all along the course and overtakes not one but two of the men ahead of him. As he hurtles over the finish line 65 minutes after he started he’s set a new fastest time but current world TT champion Fabian Cancellara is right behind him and almost immediately he’s demoted to second.

Minutes later he’s drinking water again, buckets of it, and patiently dealing with the press geeks. “How do you feel David? A good ride?”

He looks into the far distance the way he does. “I feel like shit actually, the last 2 weeks have been hard. My main job today was to set times for Christian and let him know what the course was like.”

In the end Millar comes 5th in the stage at an average speed of 49 kph.

Later I find him hidden behind the trailer relaxing. Some fans discover him too. They have a big box of beer with them. 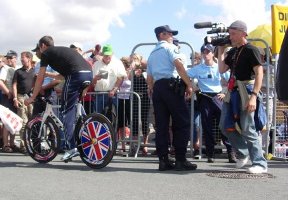 Postscript: CVV is racing for his top 5 slot at the Tour. When he arrives I have to get in there and get his reaction but Mr. Pony Tail is on my case. I hover at the back of the shute waiting for my moment, trying to keep hidden. When CVV finally arrives I dodge, sprint and slide through the crowd to the front of Christian’s wheel. I am on my knees and looking up at Christian and the mics, faces and cameras of my fellow Tour-hounds who have pushed forward to interview him. As my heart pounds I have to hold this shot steady…it’s possibly the best shot of the whole 3 weeks. Then a hand reaches through the legs and grabs the viewfinder of my camera – it’s Mr. Freakin’ Pony-Tail and he’s going to break my $7,500 camera if I don’t let him have his way. Next his other hand is on my collar and he’s dragging me away. I shout at him, “I’m on his team!” which is kind of accurate. Everyone stops. Christian and all the press turn and stare for a second. Clearly this kind of behavior is not acceptable at the Tour.

I slink off, hurt. Mr. Pony Tail has won.