Once upon a time I went to Australia for two and a half days to shoot a video for a friend of Boy George. For such a short trip it turned out to be quite an adventure involving many acres of burnt countryside, ten tubes of toothpaste, a super 8 camera and a strange story of adultery. I’ll give you the details on another occasion but I’d always felt the need to return for another, more detailed, look to the country that they always joked was different from yogurt. (Yogurt’s a live culture).

Land at breakfast time in Sydney looking forward to seeing my old friend Ed who’ll be meeting me at the gate. I should have known better he is still across town having breakfast. Later we find ourselves upon a boat of the Captain Cook Tour Line cruising Sydney’s amazing harbour. In an eerie re-run of a long distant Christmas holiday in which we’d stationed ourselves happily in the front of a sleigh on a cold Colorado night happy with our exclusive seats only to realize we were facing the arses of two exceptionally flatulent horses we now grab two rows of seats on the top deck at the back of the ferry and subsequently realize we will be down-wind of the boat’s exhaust system for the next two hours. In my highly jet-lagged state I strap on the iPod and listen to a Trevor Rabin era Yes album. The day ends with a Monorail trip back to our hotel after dinner. Ed’s upset that I’m not eager join him on an expedition to search for extra-mural activities involving willing Australian babes. I remind him that a) I haven’t been to bed for about 44 hours and that b) in the 30 years we’ve been going on holiday together neither one of us has ever scored.

We drive to the Blue Mountains outside Sydney. I’ve got my Bike Friday with me and I hope to achieve two ambitions this trip 1) to complete my 2,000th mile on the bike in one calendar year and 2) to see a kangaroo in the wild. After 11 measly miles of cycling I climb back in the car: there’s an unpleasant head wind, it’s unbearably hot and I’m still jet-lagged. We have a distant view of Sydney from a lookout and notice how the suburbs snake out from the city following the lines of the arterial roads. No kangaroos.

Ed and I are godfathers to two wonderful sisters: Hannah and Zoe. We go to meet them and Eddie & Sheila (their Mum and Dad) at the airport and then race for the Ferry to Manly Island. Eddie is very manly and body-surfs while I fall asleep on the sand listening to Stevie Wonder. 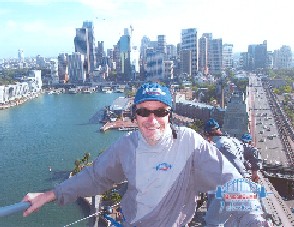 Today’s big event is climbing up on top of the Sydney Harbour Bridge. Sadly none of us are BASE jumpers or rock climbers looking for front page news so we pay $150 Australian and, like extras from an old version of Star Trek, suit up in cheesy-looking grey boiler suits and undergo a 40 minute safety tutorial before we are allowed out on the hallowed structure. By the time we’ve climbed to the top our calves are hurting and our noses are roasted by the sun but Gavin, our genial guide, has furnished us with all kinds of wonderfully useless trivia. For example the British built bridge came with a 6 month guarantee and is now well past its planned 70 year life-span but they’re hopeful they can string out its usefulness for another 300 or 400 years.

(Christmas Day) A flight to Melbourne and a drive down the Mornington Peninsula towards Portsea where we meet up with another eight of our friends and spend the afternoon on the beach which, I’ve always been told, is what all Aussies do on Christmas Day. For dinner we are treated to a sumptuous BBQed turkey and I get a rockin yellow Kangaroo keychain for a Christmas present.

I bike 42 miles and discover the Pig & Whistle, a gorgeous English style pub, situated high upon a hill near Arthur’s Seat that offers a stunning view of the Southern end of the Peninsula. All 14 of us descend upon the place in the evening for dinner and I order the kangaroo. It doesn’t taste like chicken.

My hotel is situated close to Sorrento beach and claims that is has freshly renovated rooms. While this statement was clearly accurate around the time that Nixon was President it (or the paintwork in my room) needs some updating. The bathroom and the communal showers are down the hall, my room is opposite the games room in which three year old children can be found at all hours of the day pounding on the piano. I’d venture to say that neither Van Cliburn nor Elton John need lose any sleep tonight. Around the back of the hotel there are very friendly and rather large black birds with white stripes on them, no kangaroos. I ride to Rye Ocean beach. Glorious views and very windy.

I’ve finished my book about a German POW who escapes from a lead mine and takes three years to walk across Siberia and eventually to Germany. I’m now reading Bobke II by OLN’s hysterical biking correspondent Bob Roll. Though he says Whoa! rather too much he has a way with similes that is captivating. My two favourites are: “as nervous as a balloon in a pin factory”, and “spastic as a Devo guitar solo.” Ed, Steven, Ian and I take our bikes by ferry across the mouth of the bay and cover 29 glorious miles on the other peninsula that protects Melbourne’s southern approaches. There are no kangaroos there either.

If I can cover 36 miles today I will achieve my 2,000-miles-on-a-bike-in-a-year ambition. If you’re a real biker my goal is pretty lame let’s face it the TdF guys do that in three weeks (AND they have two days off!) but for me it will be a major achievement. I’ve decided to head for the settlement of Cape Schenck. There’s an impressive scale to the typeface on the map which suggests that it’s a big enough place for me to be able to purchase food and water there. It’s very hot today and I know that I will run out of water if I have to do the full ride with no support and  this peninsula, as I’ve discovered, isn’t exactly groaning with 7-11s and convenience stores so finding supplies will be crucial. As I set out I realize it’s especially windy today and every road in this land seems to have a head-wind. I hate head-winds. I pedal on.

I reach the point on the map, a road junction, designated as Cape Schenk. Bad news, it has only one building and it’s not a shop. Good news, it has a sign which says “Beware Kangaroos for next 7km.” Right on! Now we’re talking! I decide that rather than turning right and cycling down to the cape itself I’ll go straight on towards Flinders and look for kangaroos.

2km down the road I find a second sign which insists drivers slow down and suggests that the ‘roos appear mostly between dusk and dawn. It’s broad daylight but I’m feeling optimistic and I press on. Apart from incessant head-winds, flesh-melting sun and seven out of ten of the worlds most deadly species Australia is also notable for its wicked fly population. After much pedaling I’ve discovered that at any speed above 12 mph the flies can’t keep up with me so I’m working hard on all the hills but the wind goes out of my sails when one of my ambitions is sadly realized in a form I’d not dreamt of. There in front of me is a host of teeming flies the like of which I’ve never seen in my life before and underneath it a dead and partly decomposed kangaroo. Ugh. Apart from looking very dead the kangaroo looks rather small. A quarter of a mile later another one. Also dead. Also very smelly. I’m at the top of a particularly steep hill and I know that if I pedal down it I’ll only have to come back up so I turn around and head for Cape Schenck’s lighthouse. I’m out of fluids so I’m happy to discover a tiny wooden shed selling sausage rolls, steak and kidney pies and bottled water at the usurous rates expected in a State Park. But the flies! The flies taunt me and terrorize me. As I try and eat my lukewarm steak and kidney pie they climb under my sunglasses and inside my helmet, they tickle my arms and crawl across the back of my neck. I’m feeling like that dead kangaroo on the road to Flinders. I climb upon the bike and pedal out of there fast as I can while the sauce from the steak and kidney pie dribbles on my cycling shorts and makes it look like I’ve shat myself.

On the way home I finally clock that 2,000th mile and it’s a desperate anti-climax. What now? I guess I have to try and ride more next year. Bob Roll’s 7th bicycling commandment is: One year vow to cover more miles on your bike than in your car. Hmmm.

The grown ups go and see Lost In Translation. As I’ve already seen it (and I’m probably not a grown-up) I join the younger members of our party and go see Lord Of The Rings part 3 instead. I’m reminded that Tolkein’s book was the inspiration for one great Zeppelin tune (Ramble On) and about twenty truly awful 70’s rock bands (Shadowfax, Bilbo Baggins, Gandalf etc.). I fall asleep – seen one battle against the forces of evil and you’ve seen ’em all.

Ed, Steve and Ian play golf. I follow them around the course reading Amy Gray’s Spy Girl which, despite its encouraging title, inspiring cover blurb and hip Catch Me If You Can style jacket design, has no intrigue in it whatsoever (she does most of her PI work using Google!) and is really a long whine about the endless stream of unsuccessful dates and one night stands she has with a number of very tall men. At the 17th hole (Par 4, 345 yards) Ed spots a rather fat lizard crossing the Tee. I go and study it closer just in case. Sadly it does not have a pouch or large hind legs or answer to the name of Joey.

Back in Melbourne I end my day in front of the TV and watch Australia A lose to Zimbabwe by 9 runs. During a break in play there is a TV commercial in which a kangaroo plays a significant, if momentary, part. It’s an animated kangaroo.

Fly from Melbourne to Sydney on Qantas. The Qantas terminal has a row of their planes parked outside and they all have kangaroos on their tails. In Sydney I make my connection for LA. As the jumbo staggers into the sky I look over my shoulder and the last thing I see is the top of Sydney Harbour Bridge with the two flagpoles and the Australia and New South Wales flags flapping in the breeze on top. When we passed under those flags last week Gavin told us to make a wish and he smiled and added: “Just remember I’ve been working on this bridge for four bloody years!”

I made my wish but I didn’t see a kangaroo and I can only conclude that Gavin will still be working on the bridge for the forseeable future.