The night before Stage 17 to l’Alpe d’Huez we found ourselves outside a hotel in Gap imaginatively titled Gapotel.

In the cold evening light the mechanics and soigneurs were downloading the gear from their trucks that they would need high up on the mountain the next day as the truck and team bus would not be able to make it to the top of the Alpe. They squeezed everything they could inside the team cars and went to bed as did we.

After 5 hours sleep we awoke and went to buy coffee before our long drive North. The door of the hotel was ajar as the dawn light crept into the empty lobby. In the breakfast room a rumpled man dressed all in white like a baker was filling coffee pots and cutting baguettes.

To the left of the coffee pots leant up against some tables and chairs and completely unguarded I noticed a bunch of bikes.

Thousands upon thousands of dollars worth of Garmin velos were lying behind the coffee, not so much as a bike lock in sight, and anyone could have walked in off the street and pinched one! 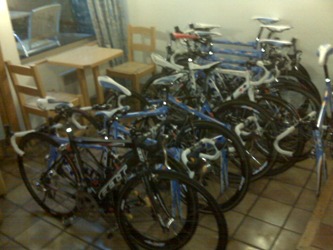