Tuesday morning found me quivering with excitement for I had been promised a seat in Car #1. I was going to be right there in the thick of the action, camera in hand on a mountain stage, and I was ready to rock. JV, team owner,ex-rider and all around good-guy, took one look at my camera and quite small camera bag – filled with spare tapes, batteries, headphones etc – and said harshly, “What’s that? Do you need that?” They were the first nasty words I have ever heard JV utter.

When I looked at my space in car #1 I had a new perspective on JV’s concern: in the backseat along with Kris the mechanic, his toolbox, a dozen bidons, a couple of boxes of food and 2 expensive wheels was a very small piece of real estate which was going to be my operating platform for the next 5 hours.

Minutes later we were racing along the flat Italian roads behind the peloton and I was getting some excellent shots of the back of our driver Matty White’s head. Whitey, as many call him, is as Australian as a box of marsupials and is the Garmin Directeur Sportif who, despite his casual day-at-Bondi-Beach look, has proven himself to be an excellent tactician; like most in his position he’s an ex rider.

In one of the vehicles at the front of the car convoy is a faceless man who narrates the Tour’s own radio station and speaks in flawless French and English. Suddenly amongst the ceaseless tour radio chatter we heard him say, “Garmin rider punctured, stopping on the right.”

Kris the mechanic leapt from the car as Trent Lowe’s small figure, standing forlornly by a roundabout with a wheel in his hand, hove into view. Seconds later Lowe was back in action and pedalling like a maniac while JV was looking backwards egging him on as the road suddenly went upwards and Lowe lost contact with the peloton. “Heck of a time to flat,” said Whitey as an elaborate ballet took place in which Car #1 overtook other cars in the convoy to resume its correct place and, with assistance from other team cars, dragged Lowe along behind it. They say the race referees turn a blind eye to this tactic but clearly Car #1 had comitted some Tour crime as one of the comissaires (mounted on the back of a moto and wearing a red helmet) roared up and gave Whitey a telling-off in French.

JV was not pleased with the censure and a furious exchange took place between the team-owner and the moto-mounted commisaire. As they yelled at each other the commisaire pointed at me and told me to turn the camera off.

If the ascent of the first major climb of the day, la Lombarde Pass, was attractive, scenic and impossibly perfect the descent on the other side made any ride at a Hollywood theme park look like a long relaxing bath in warm, milky cotton wool.

At each hairpin bend Car#1 lurched while 2 of its wheels spun uselessly in the air and the other pair quivered nervously at the edge of a vertiginous drop; I could feel the car’s suspension groan underneath me . On the same bend, barely inches away, a motorcycle was taking the inside line while its passenger blithely checked his camera or talked on his microphone. At one corner a moto whizzed past with the passenger standing up, camera held in front of him. Commisaires over-took us, fans cheered and screamed. Meanwhile the cyclists descended with such elan we couldn’t keep up. Backmarkers would overtake us furiously swapping race information or quickly snacking on energy bars, stoking the engine for the next mountain that lay ahead.

Whitey was obviously loving it, JV was looking ashen and Kris the mechanic was checking his cell phone.

As we crossed back into France another mountain lay ahead – the massive La Bonette Resteford Pass.

Whereas the first hill of the day had been wooded and charming, like a steeply sided backdrop for a Bilbo Baggins / Lord of the Rings follow-up, the Bonette was a vast beast with a massive and ugly topping that would frighten any mortal – even on a sunny afternoon like this one.

Half-way up we came across our lead man Christian VandeVelde, separated from the yellow jersey group. A cold cloud of disappointment descended on the car as Whitey modified his earlier plan, whereby a rider waited ahead to help Christian over the top, to a rescue operation to bring Christian back into contention.

Back behind the driver’s seat my emotions were at odds. The bike fan in me wanted the rider to overcome, the film-maker in me was feasting on the drama. But most of all I was gutted that Christian, a man I have come to like and respect a lot, was losing time.

From where I sat I could only see the man’s butt as he cranked away, dragging himself up the climb limiting his losses.

As we reached the peak Christian escaped from view and was gone. His descent was so rapid that, despite falling from his bike and losing another 2minutes, we never saw him again till the race was done.

Whitey’s Aussie reflection was a touch more pragmatic. “Where else can you drive like that on public roads?!” He chuckled and went in search of some food. 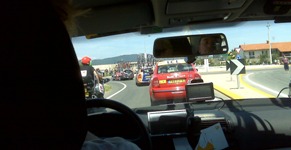