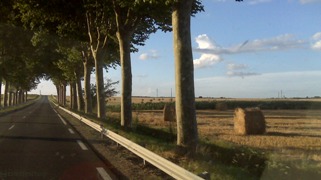 I have come to France to shoot footage for a documentary which will be shown on the Sundance Channel sometime in the summer of 2009. For the first time in my life I have proper accreditation for the Tour. Like a teenager at a gig with his first backstage pass I am beside my self with joy. Two days ago I stumbled off a plane from New York and met David Smadja – for the next 4 weeks he will drive me around France chasing the Tour while we get to know each other and live out of a small motorhome nicknamed HarV as I film the Garmin-Chipotle squad.

This morning we very nearly ran over pre-race favourite Alejandro Valverde because we were arguing with Geraldine, the tiny French lady hidden inside the GPS on our dash who, frankly, has no freakin’ idea where we are most of the time. The team we are following is sponsored by GPS makers Garmin – Geraldine works for the opposition. Ironically we cannot seem to lay our hands on a Garmin, I hope no-one finds out.

Note to self…must remember to stop asking what the BAND are doing later.