DAY NINETEEN – EVERYONE CHEERS WHILE VICTOR IS LED AWAY, SCLUB 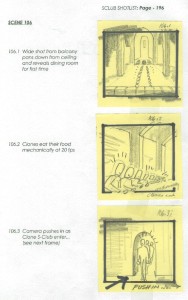 EAT SOUP WITH THE CLONES. There are only two days to go but there is so much to be accomplished that complacency is not an option – but even so we get off to another slow start. It has been a gas working with the Spanish crew but I’m finding that the local tradition of taking a 20 minute sandwich break about three hours after call is incredibly disruptive – you’re just getting up to speed when suddenly everything stops and you lose the momentum: today is no exception. As a result it takes the first half of the day to complete 30% of the days workload.

After lunch we’re finally inside the grand dining room of Victor’s castle. The scene is not really that long – just a page or so – and we should be able to get straight into the dialogue but you when you’re making a movie you need to do so much more than just shoot people talking the lines and herein lies the conundrum of production – trying to envision how much time each part of the film will REALLY take to shoot. I constantly live in denial about this reality and let the AD, the production manager and producer fight out how much time to allow, but on Sunday as I pored over the script and drew my storyboards I realised that you could easily spend a morning setting up the scene BEFORE anyone speaks. Remember that marvellous crane shot in Harry Potter when you first see the dining room? It probably said in the script something along the lines of “we see the Hogwart’s dining room for the first time…” but the shot must involve 200 extras, candles, a crane move, lighting and all the bells and whistles. If only we had their kind of resources.

But we don’t. Our scenes were further confused by SClub having to act as their clones AND their real selves – swapping dialogue with each other. As I read the lines of Hannah, Jo, Tina, Rachel Jon and Bradley the band played Clone Jo, Hannah etc. Then they changed wardrobe, we relit the scene and shot them on the other side of the grand table. All very confusing and exhausting and at the end we’d lost some shots. We have no choice but to pick them up tomorrow – as if tomorrow wasn’t a big enough day anyway.