About 1 million years ago I would sit in my pal Andy’s living room in a tiny flat off Portobello Road on a Sunday afternoon and, with our guitars cranked to 11, we would demolish Warren Zevon’s “Werewolves Of London.” As the years passed I became intoxicated by Zevon’s acerbic songwriting bite as “Roland The Headless Thompson Gunner” and other tunes crept into my DNA.

Later I made it to Hollywood and was lucky enough to shoot six videos for another of my 70’s rock heroes: Toto. As a result Jeff Porcaro asked me a favour – would I shoot a video for Warren Zevon? Of course I said yes and the resulting clip became a favourite of mine. With Jeff’s encouragement I lit the video myself and I vividly remember Warren staring at me through the camera sitting on a stool with the smoke of his ever present cigarete curling up through the frame.

I would have liked to have seen more of Warren after the shoot, and maybe even become his friend, but, apart from occasional sightings from a distance, I lost touch.

On July 12th last year my friend Brian invited me to a soireé at his pad in the hills and there standing in the kitchen was Warren looking the picture of health with a big smile on his face. As the party raged on in the rest of the pad Warren and I stood by the refrigerator and renewed our acquaintance. It was a wonderful evening and I remember how broad and his infectious his smile was. At last it seemed as if my wish might come true and at the end of the evening we exchanged numbers and e-mail addresses. 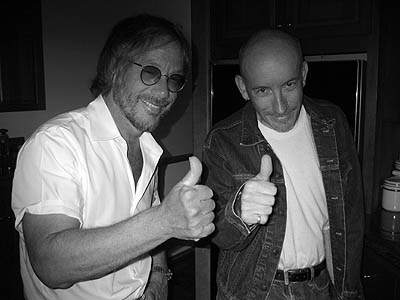 At the party with Warren – pic by Brian Linse >

The next day I received an e-mail headed “Should Old Acquaintance” which read: “Nigel, It was awfully nice running into you last night. I hope we stay in touch. I’ll give you all my numbers and crap. Give me a call if you get a chance to go for a cup of coffee—although I think my character would drink tea. Fondly, Warren” I e-mailed him straight back and, as I was about to leave for Spain to scout a movie, we arranged to meet upon my return.

While in Spain I received the terrible news that Warren had been diagnosed with inoperable, terminal cancer and, though I e-mailed him, I never spoke to him or heard from him again. He died on Sunday.

I received the news in Nashville where I was staying with a longtime friend – I had flown into town to shoot a video for another hero of mine – Rodney Crowell. Long story short Rodney’s song is about the celebration of life and the connection between Warren’s untimely demise and Rodney’s song was not lost on me. Whilst talking to the band and extras about the video the following day I considered mentioning Warren’s passing but in the end felt I would just let his spirit guide me through the day which he did with great patience.

Today is the second anniversary of 9/11 and we read all the time about how special life is and how we must not squander a single moment. I think I’ve done some squandering recently and need to get my crap together. So, Snookboy, now you and Jeff are together in rock n’ roll heaven I wish you well and make no apologies that sometime this evening the neighbours will be complaining while I crank up my amp and once more murder “Werewolves Of London” in your memory.