Miami blows. The wind comes from every direction and it has been both a blessing and a curse over the last 10 days we have been here. As you sit outside in the warm clammy evening the constant breeze makes your al fresco dining experience a delight. At this time of year there?s no need to ever worry about wearing more than a T-shirt, shorts and sandals. However from a cycling point of view its been a nightmare. I?ve completed three rides during my stay and it has seemed that whether I have been travelling north, south, east or west the wind has always been in my face.

Perhaps this should have been a warning to us. We?d flown in to shoot Diana King?s ?Summer Breezin??, a great song in which the lyrics mention ?chillin? in de sand? a number of times. It was therefore decided that Miami was the perfect location for the video and we soon picked North Beach, Crandon Park in Key Biscayne as our location. As always my shot list was ambitious but, after a few hiccups, we hit the ground running on Tuesday morning and it looked like we were going to get it all in the can.

All afternoon I?d been watching a large black cloud which came close by and then passed to the North, but then, just like it had on my bike rides, the wind changed direction and the cloud came rampaging towards us and just before 5 the first spots appeared. Within minutes we were all sheltering under the pop-up tents laughing at how hard it was falling. We could see it was clearing ahead so we waited it out but clearly, as the minutes dragged on, the cloud was either hovering over us or going around in circles. Then, impossibly the rain got heavier. We laughed more and started telling our rain-during-shoot stories – a competition which Ramsey Nickell our DP won hands down with a story from a Wayne Isham shoot in New Orleans. 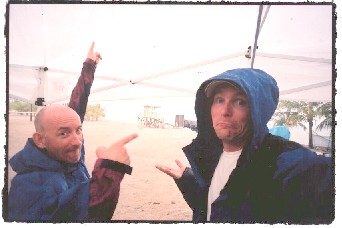 Ramsey and I shelter from the pouring rain…what to do?

After an hour it was obvious we needed to think about plan B. We scouted the beach-side area for any kind of cover and discovered a drab, hexagonal aluminium hut in the middle of a soggy patch of ground between the beach and the parking lot that could possibly be dressed into a set. The rain was by now so torrential that we were all soaked to the skin and there were massive puddles three inches and more deep on the beach and in the parking lot. Night was falling and someone suggested another option – The Rusty Pelican, a dining establishment a few miles up the street. We clambered into the van to go check it out and were amazed to find the traffic moving slowly single file along the road between the two lanes – the torrent was causing flooding so severe the drains were overloaded. The Rusty Pelican had some useful angles but it was full of diners and we?d have to wait hours before we could get in and shoot there – the a.c. was cranked so high inside that we were all shivering and everyone was happy to get back outside into the rain.

We raced back to the set. Perhaps we could wait for the morning and, if the label would cough up the cash, we could carry on with the shoot then. It had been raining for over three hours now and three inches had fallen in the last hour. As a precaution we started dressing our hexagonal hut while the producers hit their calculators and the phones. In the gale and the darkness the gear was pulled off the beach and the art department performed a miracle in the hut.

A decision was made. There was no shooting tomorrow – we had to finish tonight. I tore up my sodden shot-list and we improvised. As the last extra came out of make-up and wardrobe and as the final tweaks were made to the lighting the rain stopped! It had been falling in sheets for over five hours.

You?ll see the vid on MTV shortly I hope and you?ll wonder what all the fuss was about. There?ll be some holes in the story I planned but everyone will be smiling, Diana will look gorgeous and it will all feel like summer fun and only we will know that everyone behind the camera was soaked to the skin!