You are here: Home / Dick's Diary / 2gether / THE REAL SHOOT: DAYS ONE, TWO AND THREE: VARIOUS TESTEMONIALS AT TRUCK STOPS AND FAST-FOOD JOINTS, A COUPLE OF SLEAZY MOTELS AND JERRY GOES BACK TO BOSTON TO SEE ERIN IN HER VIDEO STORE…

The dailies look great, I’m still on the job and I’ve fulfilled that ambition to shoot in Chilliwack. The people were very kind to us and generous with their parking lots and gas stations. The weather however has been less kind. Despite working on film sets for 15 years I’ve never witnessed a crew so prepared for the wet. In the last week I’ve learnt lots of interesting new ways of keeping gear dry and for the first time ever have seen the first AC (a fine focus-puller named Robert) warming up the camera at the first available opportunity so that it’s not covered in condensation when we need it. I’ve seen more rain during a shoot in the last three days than I have in my entire film-making career to date…and of course the sun was out all weekend!

Mr Buss has exceeded my wildest dreams. He is the possesor of fine thespian instincts and I feel like a violin student who has a rare Stradivarius on loan for a month…I could just play and play. And the guys? They are a blast and my heart is filled with joy when I see them on set every morning. They are truly turning into a band and I can see a fine future ahead for them – Backstreet Boys and N Sync watch out! After work last night they all retired to the Karaoke Bar at the hotel and stunned the locals with their fine vocal stylings…Mickey said that Chad put on a particularly fine show. QT, who of course was discovered in a Karaoke bar, was unable to make a showing because he had school-work to do. 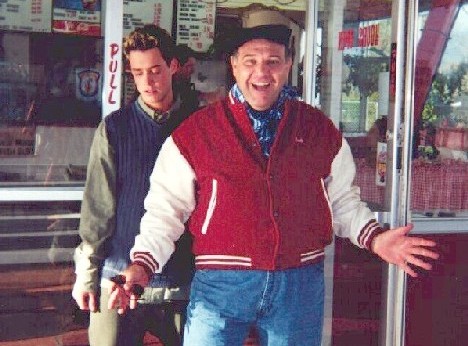 Buss and his shy one

We finally got to meet Erin today and I swear that Doug, Chad, QT and Mickey were as excited about meeting her as Jerry was. Of course Jerry was the lucky one and got to kiss her on film. Of course I had to shoot the scene about eight times so he had to kiss her over and over…wish I had his job! Erin is very cool and wore the distinctive Video Station hat with aplomb and shouted at the passing traffic just like I asked her to. Wonder what her thoughts about todays events are as she slips into sleep? Is she thinking about Jerry? Will they get back 2gether? Watch this space.